This is a model about a ROS network that exhibits five design principles, and has been calibrated so as to predict quantitatively various steady state concentrations. 10191125.

Instructions RUN the model for steady state. For the Menadione experiment set the initial concentration of 'Menadione' species to experimental dosing i.e. 100 000 nM (0.1 mM) and make the simulation type "reaction" for both the species i.e. 'Menadione' and 'Menadione_internal'. Then run for 24 hr i.e. 1500 minutes approx. Plot e.g. ATP. For H2O2 experimental data validation for repeated treatment at 50uM, 150uM, and 300uM. To run the model with different dosing scenarios, one has to set both the H2O2 initial concentration and the global parameter "H2O2 addition" from zero to the required dosage, and also change the species 'H2O2', 'H2O2_internal' and 'Damage' to ‘reaction’ type from ‘fixed’ type. For instance for the dosing amount of 50 uM (50000 nM), set the initial concentration i.e. H2O2 species to 50000 nM and select ‘reaction’ type simulation for both the H2O2 and H2O2_internal species . And also set the Global parameter H2O2 to 50 000nM, keeping the simulation type ‘fixed’. To run the single dose experiment one has to set the initial value of species H2O2 to corresponding dosage and simulation type to ‘reaction’ from ‘fixed’ for both the 'H2O2' and 'H2O2_internal' species. Note: global parameter "H2O2 addition" should be zero in case of single dose treatment. One can reproduce the aging phenomenon with the following step. Change the species 'Aging' simulation type from ‘fixed’ to ‘reaction’. To see the effects of coffee on aging one has to go to the global parameters and then select "coffee addition (fold activation of Nrf2 synt)" and set the value of 1.2. Then run the simulation. To see the effects of Antioxidant treatments on aging one has to go to the global parameters and then select "Antioxidant_treatment" and set the value to 1.2. Then run the simulation. To observe the mitohormesis effect in the aging model one can increase the ROS signal reception by the mitoptosis proteins by 50% (i.e., set the global parameter "Mitohormesis_factor" to 1.5 which will increase the rate constant of reaction 39 by 50%). This increased the lifetime by 80% in the aging model. To observe the KEAP1 deletion phenomenon we have created two global parameters namely 'KEAP_deletion" = 1 and "KEAP_reverse" = 0 in the original model. This should not affect the master model of aging or Steady state. Moreover events were created to knockout the KEPA1 from the 7th week (approx. 70560 minutes) onward and reverse it back at the 17th week (approx. 172800 minutes). To reproduce the phenomenon, one has to set both the 'KEAP_deletion" = 0 and "KEAP_reverse" = 22.61 (initial concentration of KEAP1) and then go to the species, then select KEAP1 and then change the simulation type to "fixed" from "reaction". Then the time course should run up to 300 000 mins with interval size of around 10-20. To reproduce the memory effect in the aging model, one has to set the global parameters both 'aging_reduction_during_memoryPulse' to 0.001, which has same events function as ROSpulse (another global parameter) and 'Aging_memory_pulse' to 12.5 or around that number. The idea is when you give high ROSpulse, it should not reduce the ATP OR MITOCHONDRIA levels via aging phenomena. As in our model both aging and Memory effect are done through ROSsynt rate constant. So to eliminate the effect of Aging_memory_pulse on normal aging, we made an 'event' where "Aging_rate_constant_re63" was reduced by a factor of 1000 only when there is addition of memory_pulse otherwise the rate constant will have its original value. This is also important to keep the model stable while giving a pulse of ROS. If we do not eliminate the ROS pulse, then damage via accelerating aging will occur. Then ROS grows exponentially high and model explodes. To see the memory effect clearly one has to set the simulation time of 3 500 000 with a step size of 20. And then in plotting select ATP, Healthy Mitochondria, and ROS.

2 items (and an image) are associated with this Model:

Model image: (Click on the image to zoom) (Original) 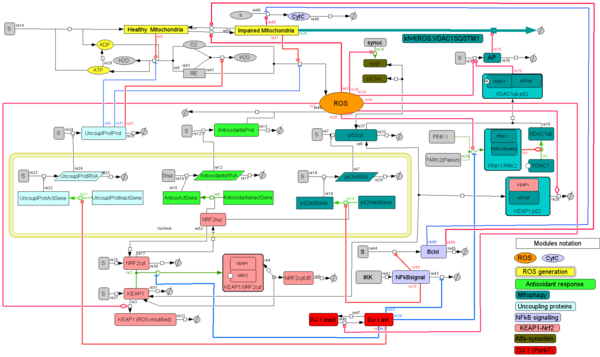 This item has not yet been tagged.

Model repository for M4 (Make Me My Model) clients of ISBE

ISBE-Light provides M4 service (Make Me My Mode) where non modelers can request (assistance with) the making of a computational model of their biological system. These models are deposited here.

We are modelling ROS management and mitochondrial dysfunction. Mitochondria produce both energy and reactive oxygen species (ROS), and suffer from ROS. Experimental data from University Milan-Bicocca.

Studies: ROS Models and Data for NPJ Systems Biology and Application (A. Kolodkin...

Study: ROS Models and Data for NPJ Systems Biology and...